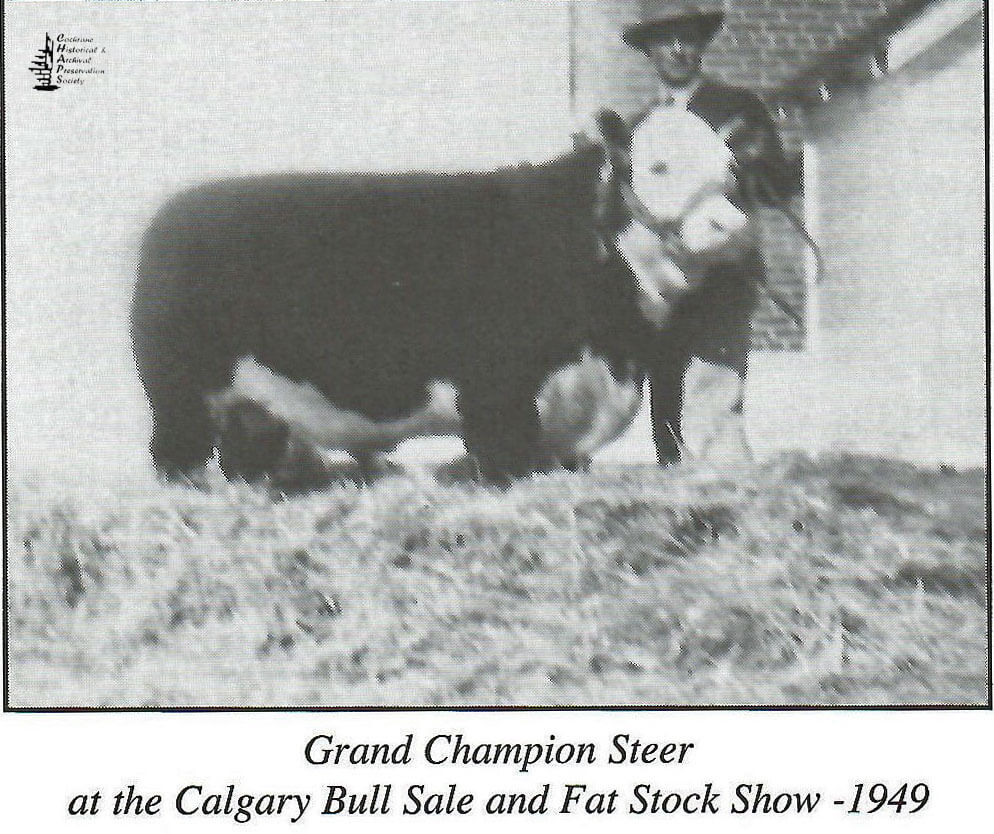 Bert Powlesland was born in Cardston, Alberta, on July 25, 1925, and was raised on a mixed farm at Del Bonita, Alberta.

I received my schooling at Del Bonita and furthered my education at Olds School of Agriculture. I graduated in 1945.

It was at Olds I met my future bride, Marion Clayton of Airdrie, Alberta. We married on November 16, 1946, at the Anglican Pro-Cathedral Church of the Redeemer. Calgary.

Our herd of Registered Hereford cattle was established in 1936 by my father. In 1945, the herd had grown to the size that our holdings at Del Bonita could not accommodate them all. My father and I went searching for land and after looking at several parcels that were for sale, we decided to settle in the Cochrane area.

On Thursday, November 1, 1945, my brother Ray and I trailed 30 head of cows and a few late calves from the farm at Del Bonita to the station at Whiskey Gap, 14 miles. Here they were loaded in boxcars to be shipped by Canadian Pacific Railway to Cochrane on Friday, November 2, 1945.

My father and I loaded our faithful saddle horse “Old Tony” in a 1941 International, half-ton pickup and headed for Cochrane. We arrived in Cochrane Friday evening but had a hard time finding a bed as the Jumping Pound Gas Field was booming at this time. Finally, we rented a room from Miss Gillis in a boarding house.

The weather had been real mild “chinook winds” and we expected the cows to arrive Saturday, November 3, but found out that the Canadian Pacific Railway wasn’t very efficient. On Sunday morning the weather changed, a very bad storm blew in from the north. Father had to return to Del Bonita, so left me in charge of getting the cattle to their new home, nine miles north of Cochrane.

We waited and waited for that train all day Sunday and the snow got deeper as the temperature fell. Finally, about 8 pm the cattle did arrive. My helper Joe Allen and I took a look at the cows and decided to leave them on the freight cars for the night. We were up before daylight Monday morning November 5th, as I couldn’t wait to see how the cows and calves had stood the trip. The cows looked pretty good however the calves had

shrunk quite a lot. After unloading the cattle, I said to Joe “Sure would like to feed those cows before starting to trail them.”

Joe had a friend Andy Garson (a relative of Alan and Victor Garson of Drumheller) who had a team and a hayrack. Andy was very kind and brought about half a ton of loose hay so the cows were fed before leaving Cochrane Stockyards. I believe the hay cost $10.00 delivered. Andy said, “Best bunch of cows ever to hit Cochrane.”

By this time the snow was 18 inches deep and the temperature was 20 degrees below Fahrenheit. After feeding the cows and having a good dinner at Mrs. McGurdy’s Café, Joe and I headed out with the 30 cows and 6 calves. I was riding my faithful old gray horse Tony and Joe had a good brown mare. Actually, we did very little riding as it was so darn cold and still storming.

About two miles out we met Del Sperry pulling a little two-wheel trailer with a tractor, delivering his milk, as the road was impossible for trucks and cars to travel. We stopped for a cup of tea at Earl Fenton’s as we were darn near frozen. Finally, near dark, we arrived at one of the farms we had purchased, five miles north of town. Luckily we had a stack of hay here and were able to feed the hungry cows again.

Joe and I stayed overnight with Mr. and Mrs. Harry Beadle who were still living in the house at the time. The next day, November 6th, we moved the herd another 4 miles to where we would winter them and live at the Ranch near the head of Big Hill Springs.

It took almost a week to move the cows and calves that were to be the nucleus of Rusticana Herefords. Today a cattle liner could do this job in as many hours or much less.

The winter of 1947–1948 was one of the worst I can recall here at Cochrane. There was no snowplough service at that time and we were snowed in for most of January and February. I would ride into Cochrane about once a week or sometimes take a team and sleigh. Some may recall the controversy over the Cochrane and Cremona road that winter. Even with the Government Snow Blowers, the road could not be kept open. Finally, about March 1st, the people in the district hired a bulldozer. After many days the main road was opened but we still had to persuade the dozer operator to come to our ranch so we could get our bulls out to the Calgary Bull Sale. We sold 15 bulls at Calgary in 1948, as it was the only sale close to us at the time.

One very cold day in the winter of 1948, I decided to ride to Cochrane for the mail and a few groceries, Meanwhile, Marion had phoned in so it was all ready for me. Blue jeans were really hard to come by so I had asked the clerk to save me a pair if any came in. I took the parcel of goods from the store and tied it on the back of my saddle and started for home. The parcel seemed a bit bulky so I thought, by golly, she put in a pair of jeans for me. Curiosity got the best of me so I had to pull off the paper and what do you think? Marion had ordered four rolls of toilet paper!

1949 was a very dry year with poor crops and hay. We attended the Bull Sale again with a string of bulls and also I had the Grand Champion Steer. We contributed Hereford Bulls to sales for 35 years, winning many trophies and ribbons. 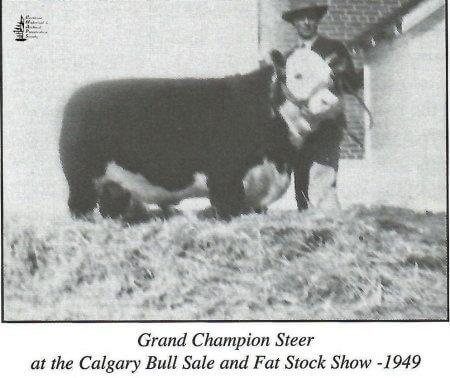 Our son Lawrence Ivor (Larry) was born on April 15, 1949, on Good Friday, at the Holy Cross Hospital in Calgary. It was unusually warm weather for this time of year.

When he was four years old, he was very ill and we were snowed in and couldn’t get out for approximately two weeks. When we finally did get him to a Doctor in Calgary he was admitted to the hospital with appendicitis.

Our daughter Donna Marion was born at the Holy Cross Hospital, September 22, 1951, and the weather was terrible, snow, rain and lots of mud.

When our children were big enough, we would walk to Big Hill Springs Park. They would play and we’d have a wiener roast. While we lived at the Ranch, a fish hatchery was built at the Big Hill Springs Park but to no avail. Because of the water temperature, it was removed.

When Larry was old enough for school, we had to take him to meet the School Bus, kitty-corner of the section and it was a difficult chore, meeting the bus at 7 am and again at 5 pm. We had to go any way we could

by tractor, truck or however we could get there, as we had to compete with the weather, mud or snow. George Webb was the Bus Driver.

We lived at the Ranch until the summer of 1956 when we sold a portion of the Ranch to Graham Greene of England, a noted author.

We had already purchased N Sec 25 Rge 4 W5M. and W Sec 36 Rge 4 W5M for $20,000 from Dick and Evelyn Gilbert. We moved here in August of 1956 and continued to raise Purebred Herefords. We held four cattle sales at our Sales Barn and then sold cattle in Calgary and Lethbridge.

We hayed the north half section of 35, which was native hay. George Webb, Dewey Blaney, Happy Bansemer, Orville Webb, Bill and Harry Webb were the crew.

Donna continued on to Cochrane High and then graduated from Olds College. She met her future husband. Ian Airth, and they married June 10, 1972, at Parkdale United Church, Calgary.

We have always been very involved in our community and have seen many changes, from having no power, no natural gas, a haphazard telephone system and very few roads.

Bert was instrumental in helping these luxuries arrive. He served on the Cochrane North Mutual Telephone Company and has served as Director of the Cochrane Lake Gas Co-op for 50 years. 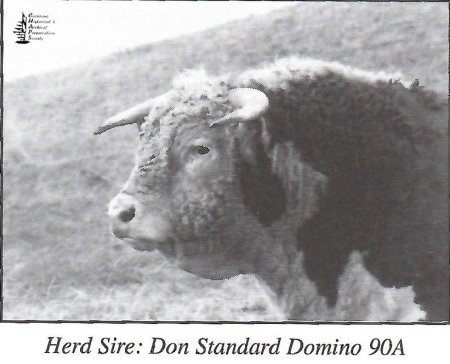 Marion is a Past President of Chinook Hereford Belles and was instrumental in the formation of the Alberta Junior Hereford Club, Past President and Secretary of the Westbrook Parent Teacher’s Association, volunteered to help with the formation of the Westbrook School Fair and volunteers as a Judge for Baking Classes. This fair is still continuing after 45 years. She is a member of Lochend Ladies Club since 1951, a charter member of Cochrane Lioness Club and a Past Secretary, also served a term for the Lions and Lioness District as Lioness Associate for all Lioness Clubs. She served as Secretary for Big Hill Senior Citizens Association for many years.

We both received Melvin Jones awards, the highest award given by Lions International. We are both Life Members of our respective Clubs.

In 1992, we received the Cochrane and District Chamber of Commerce Community Builder Award and also an Outstanding Citizenship Award from the Municipal District of Rocky View #44, and in March 2001 the Canadian Hereford Association Honour Roll, Hereford Breeders of Distinction Award.

Since 1949 we have been members of the Weedon Pioneer Association.

In 1974 we moved to where we are today. Our daughter Donna and husband Ian Airth live on the Rusticana Ranch, raising hay and a commercial herd of cattle.

They raised two boys, Howard and Clayton. Howard and his wife Jolene live close by with their two children, Keely and Justin. Clayton lives in Red Deer and has two children, Michael and Andrew.

We enjoy living in our community but find it is changing too much and too fast. We celebrated our Diamond Wedding Anniversary, November 16, 2006. We have been blessed to have lived here all these years. We enjoy our grandchildren and great-grandchildren and our family. We have enjoyed travelling with our motorhome and to England and the U.S., Our hobbies and gardening keep us busy. Family gatherings in the summer and at Christmas, visits with our numerous friends and the class reunions each year at Olds are great times to enjoy and remember. 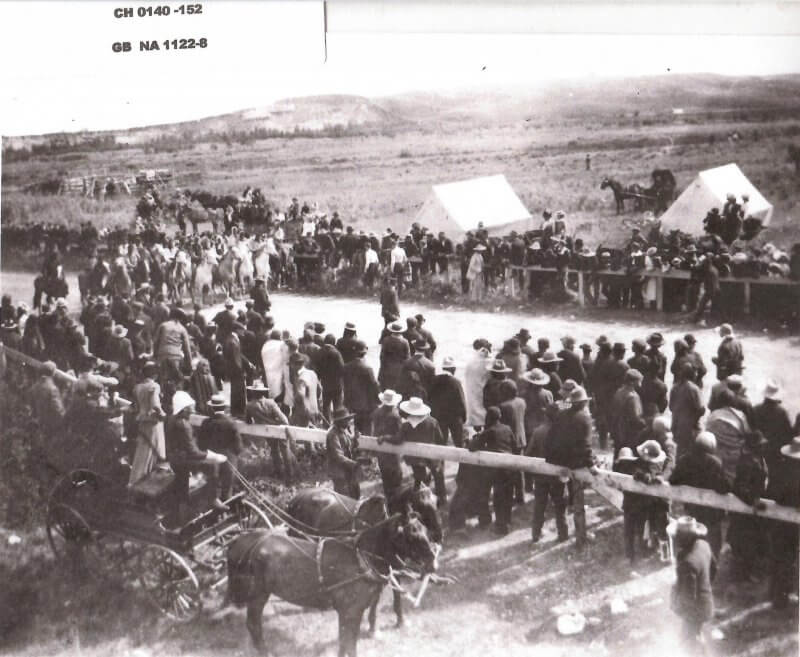 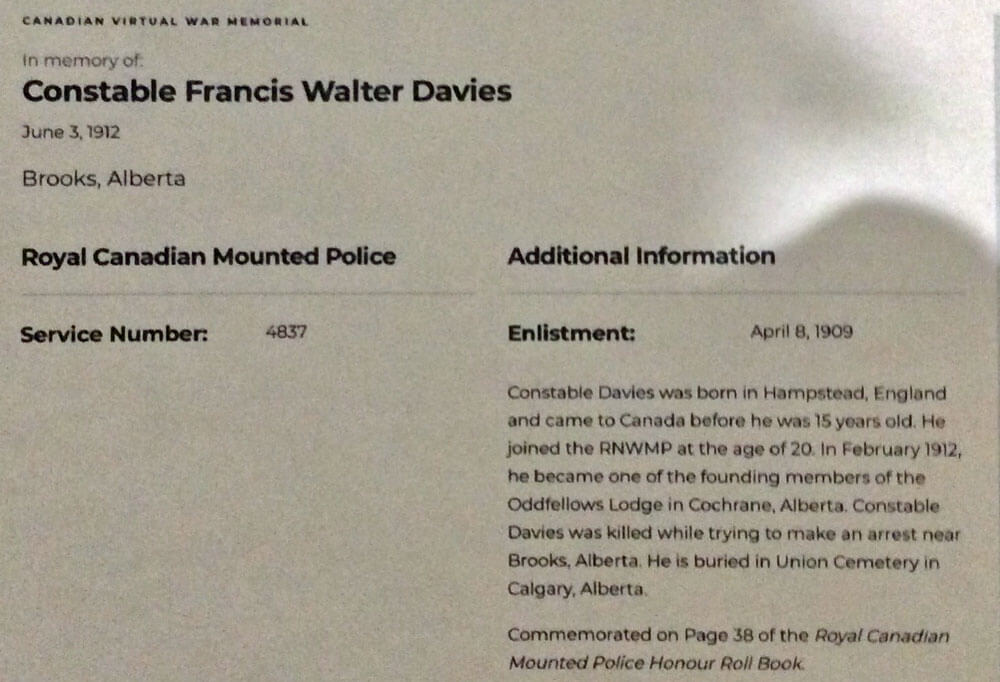 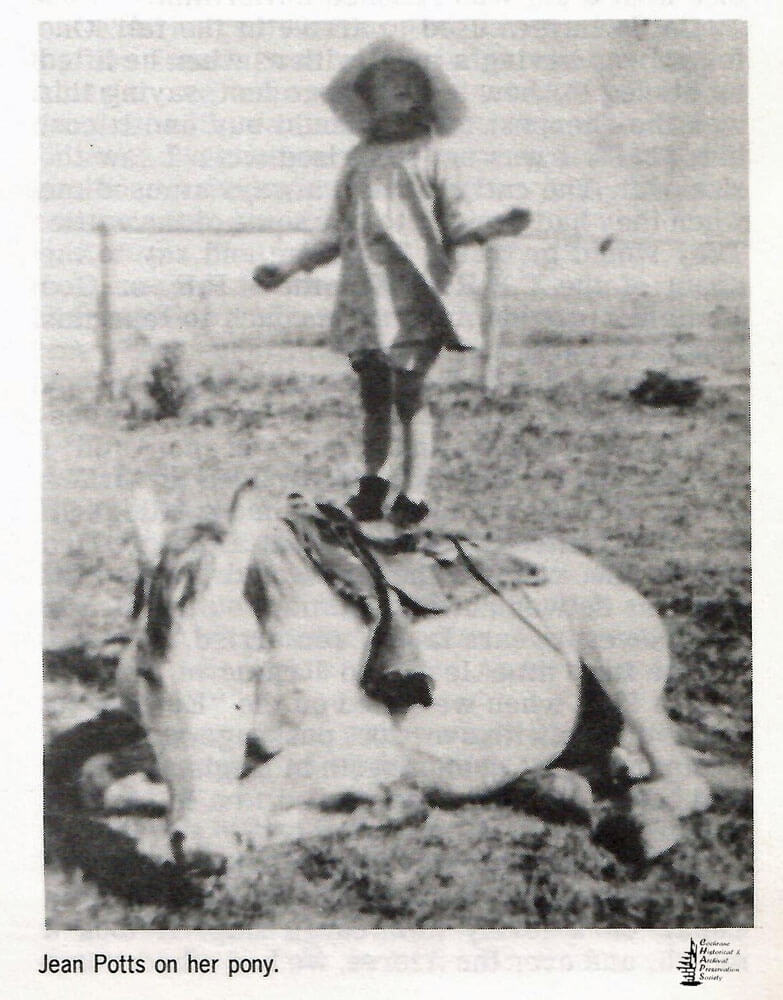